With an accurate air fuel ratio analyzer and a load bearing chassis dyno at our disposal we were able to put the most popular injector cleaning methods to the test. 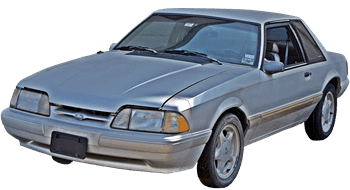 For the project a 1993 Ford Mustang Lx with 135 k miles on the odometer was used. The car was not driven for approximately two months prior to the experiment.

First a compression and a leak-down test was done. Both checked out fine. Then the fuel tank was drained. Although the fuel was slightly discolored it had not developed a bad odor and there was no indication of phase separation.

An Autronic model B air fuel analyzer was hooked up to the tailpipe and 10 Gallons of fresh gas was poured into the tank. Upon startup the engine had a little stumble but once the engine was warm it ran “fairly” smooth. Throttle response was fair with slight misfires present under free revving. The car was taken on a road trip consisting of some open road and some stop and go driving. Although at cruise the engine ran fairly smooth the Air Fuel Ratio (AFR) constantly indicating that the engine was running between lean and rich. Stop and go driving showed huge lean-rich fluctuations. Wide open throttle acceleration was very sluggish and produced misfires.

Back at  the shop the fuel tank was emptied into a 5 gallon measuring can. 1.85 Gallons was recorded. Based on this  8.15 gallons of gas was used for the 102.7 mile trip, resulting in an average fuel consumption of 12.6 miles per gallon.

Time for some dyno testing:

Based on engine size, fuel injector size and fuel type being used etc. we calculated that the car should be able to produce 85 – 90 horsepower to the wheels.

5 Gallons of fresh gas was poured in the fuel tank and then the car was run on a load bearing chassis dynamometer. AFR ratios indicated lean engine conditions and the car produced 72 HP. That’s about 15% less than expected.

During dyno testing the fuel pressure under load stayed constant between 43 and 45 psi, indicating a healthy fuel pump.

Based on the above we felt that the fuel injectors in the car was dirty and need cleaning. We removed the injector and flow test them. The results were as follows 156, 168, 180 and 172 cc/min.

The first cleaning method we wanted to test was Fuel Injector Cleaner. Also known as injector cleaning additives. This type cleaner is poured into the fuel tank and mix with the fuel. The injectors were reinstalled without cleaning them. The fuel tank was drained. A quality brand name fuel injection cleaner was mixed to the exact manufacturers specification with 5 gallons of fresh fuel and then pored in the fuel tank. Cost for the injector cleaner was $12.50. Within a couple of minutes after start-up it was noticed that the engine started to run a little rougher.

This time the car would only produce 63 HP on the first dyno pull but could not complete a second dyno pull because the engine bogged down and started to misfire badly. The AFR went lean indicating an AFR of 17:1 and up.

Now the engine would not maintain idle and had to be kept alive by means of additional throttle input.

The fuel injector were removed and flow tested. This time the injectors flowed 128, 162, 136 and 122. In addition, two of the injectors was now leaking.

The injector cleaner loosen dirt in the fuel line and rail and partially clogged the injectors.

Injector cleaners might be inexpensive but be careful because their use can have disastrous consequences.

We re-installed the injectors without cleaning them. This time we used fuel rail induced high pressure injector cleaner. Cost at a dealer or an auto repair shop for doing this procedure would vary between $225.00 and $350.00. After the process the engine just managed to run without additional input but as soon as the throttle was touched the engine would die. Starting became hard and a fuel smell was noticeable during cranking.

Needless to say that strapping the car down on the dyno was a waste of time.

Not to side step the proponents of the DIY cleaning process we rigged up a 12 volt auto battery with a push type on of switch, a syringe with carburetor cleaner and followed the procedure as described in some of the YouTube videos. To make sure that we do a “thorough job” we repeated the process 5 times per injector and then back to the flow bench. The results 172, 174, 180 and 174 cc/min. We saw a small improvement from the original flow test. It was minor and not enough to warrant additional dyno time.

It is our opinion that the DIY fuel injection cleaning methods might remove some loose debris but because the actual cleaning fluid does not stay in contact with the internal injector components for any extended period of time it cannot dissolve or loosen the baked on hydrocarbons or harden shellac.

Finally the fuel injector were put through a full ultrasonic fuel injector cleaning process. This injector cleaning method requires about 45 – 60 minutes in the ultrasonic bath. Afterwards  the injectors was flow tested and this time the results was 192, 192, 194 and 192. New filter baskets and O-rings was installed. The injectors was installed using PTFE O-ring grease on the O-rings on both the manifold and fuel rail side.

The gas tank was drained and 5 gallons of fresh gas was added and again we installed a new fuel filter.  The engine fired up immediate and ran smooth. Throttle response was good with no misfires. Free revving produced no misfires. Air to fuel ratios (AFR) stayed within 14.2: 1 – 14.9:1

The vehicle produced 87 HP on the dyno and AFR’s stayed within an acceptable range during full power loads.

Once again we drained all the gas and re added exactly 10 gallons of fresh gas. We proceeded to complete the exact road and city trip we did in the beginning. This time we used 5.1 gallons of gas thus recording an average fuel consumption of 20.13 MPG. A fuel consumption decrees of 80%.

Based on our test on the above vehicle and subsequent newer models, a whole new range of variables are introduced when using high pressure fuel rail induced injector cleaner.  Some of these variables can have costly result. It is expensive and we do not recommend its use on older fuel systems. We also caution its use in newer fuel systems.

Proofed by our “injector cleaning  steps” comparison test we belief that ultrasonic cleaning of the injectors when removed from the engine delivers not only the best results but it is the only method that can actually guarantee a better result.

Let us help you. Click here for shipping instructions

Advantages and disadvantages of  these injector cleaning methods

Ultrasonic cleaning with fuel injectors removed from the engine.